See What These Two Naked Women Did In Public (Photos) 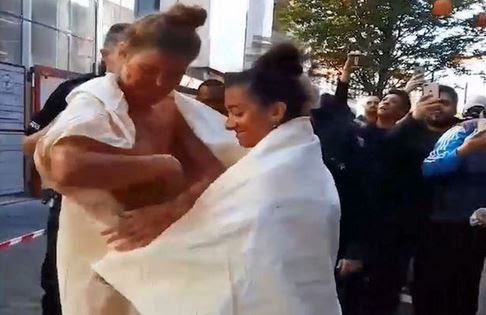 Two naked women covered head-to-toe in jam sat on a bench in broad daylight in the middle of Manchester city centre. Shocked hoppers watched the unusual spectacle on Market Street just before midday on Wednesday.
A crowd formed around the two women outside Barclays bank in the middle of the busy shopping street, M.E.N. reported. Video footage show the women covered head to toe in a sticky red substance while they sat side-by-side.
Other images show them covering themselves in white sheets as two police officers speak to them. One onlooker told the M.E.N that the two women appeared to be covered in what looked like some kind of red jam.
He said: “They looked like they were rubbing strawberry jam on each other.” Confused onlookers took to Twitter to try and find out who and why they were there.
A Greater Manchester Police spokesperson said officers are ‘looking into’ the incident. They added: “Officers were called to Market Street following reports of two naked women sat on a bench covered in jam.”
WATCH HOW TO UPLOAD ON NIGELZIENT
WHATSAPP - 08185273443