Lady blasts helper who sent her 10k to stock up amid Covid lockdown. (Details)

A Nigerian man has taken to his Facebook page to give the narrative of how a supposed ungrateful lady blasted him for giving her a minute amount of money to stock up amid the Cororvirus lockdown.

ID Okorie on Facebook took to his page to share how he’d budgeted an amount of money to be disbursed to those in need because of the lockdown in the country.

He revealed that while majority of the beneficiaries who received tokens in 10k, 5k, 4k divisions were totally grateful for his gesture, one of them however showed vile ingratitude which had him come on social media to rant.

According to him, one Uche Nilla Amechi who he says got the sum of 10k from him was quite ungrateful over the amount that she took to his DM to slam him for the gesture. He revealed that he’d initially spoken with her on the phone where she was nagging about the money and he out of disgust, dropped the call.

He says it was thereafter the lady took to this DM to slam him further. He reveals how the lady is a somewhat old acquaintance who he’d been in touch with before the whole saga and he’d had his doubts about her motives before.

He wrote alongside screenshots of their chats below,

The moment government began to talk about Nation wide or states lockdown i knew there will be so many outcry for help so i budgeted N300,000 for those that will need my help from 300k i increased to half a million for families,social media friends and Neighbors. One of them who approached me that she has no food at home was Uche Nilla Amaechi.

The #500k was shared between 10k,5k and 4k many people here on Facebook Benefited,there is a man here that reside in Kaduna in his message he said ” even breakfast for that morning 30th he doesnt have in his house” He also benefited.
All the beneficiaries were grateful many send prayers,the only ingrate among them was Uche Nilla Amechi who called to tell me that the 10k i send to her is not enough to buy what she needed,I almost gone mad and dropped the call.Note: she is not my lady,relatives,staff neither am i asking her out ,she is just like every other persons that asked for help. 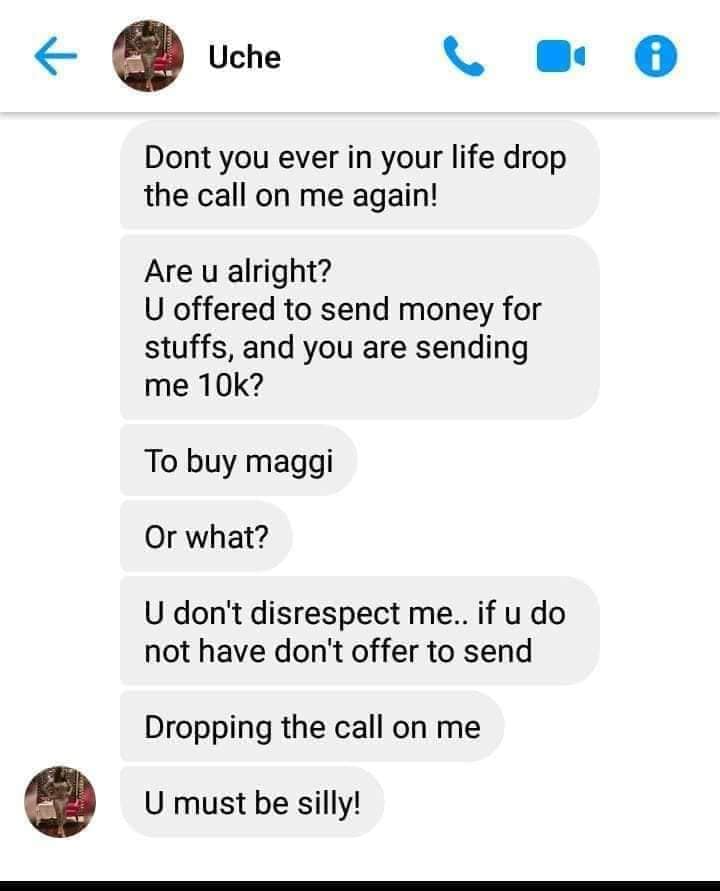 This corporate Abuja runs girl who has been pestering me to introduce her to my friend and a top NNPC staff couldn’t even say thank you rather she asked me if the money was for her to buy maggi or what,i have asked her to return the money back let me give it to those that will appreciate it.

It’s over 72hrs and she has not rather she went ahead to insult me. Nobody got more than 10k,2 of my cousins got same 10k each are here on fb.If by the end of lockdown and she failed to return it i dont mind spending over 100k to recover that 10k. The sugar daddies they sleep with that throws money around with them are now with their families and cant pick their calls hence they result to social media begging yet she cant value 10k and at same time the hungry girl can not afford to return it. 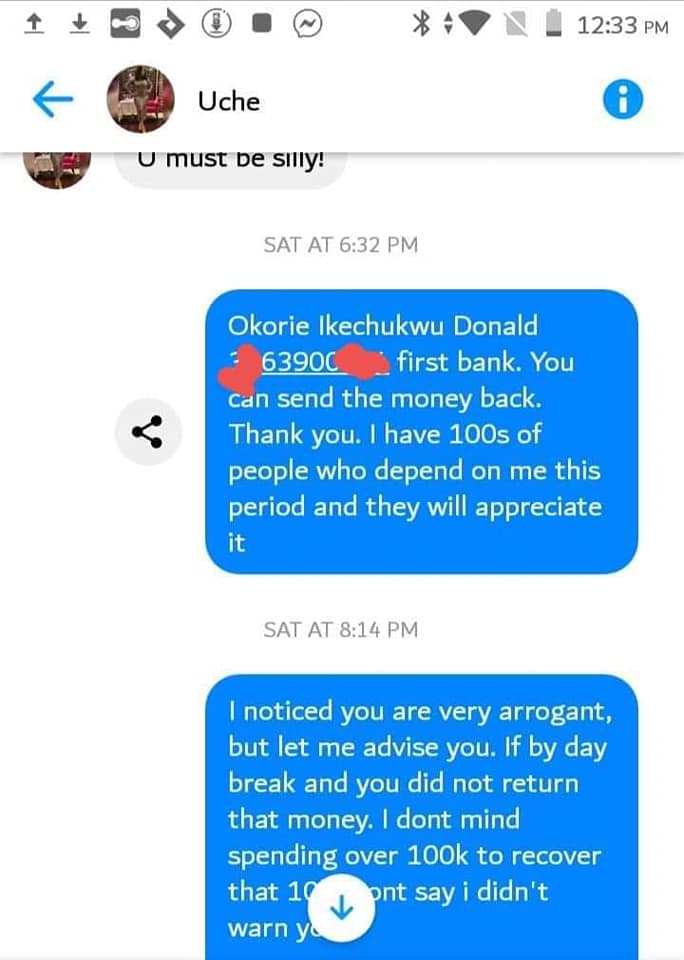 There are so many people giving a helping hand to people without making noise about it and ingrate like Uche Nilla Amechi Amechi shouldn’t be benefiting.

I warned her several to return the money and she kept on insulting me. 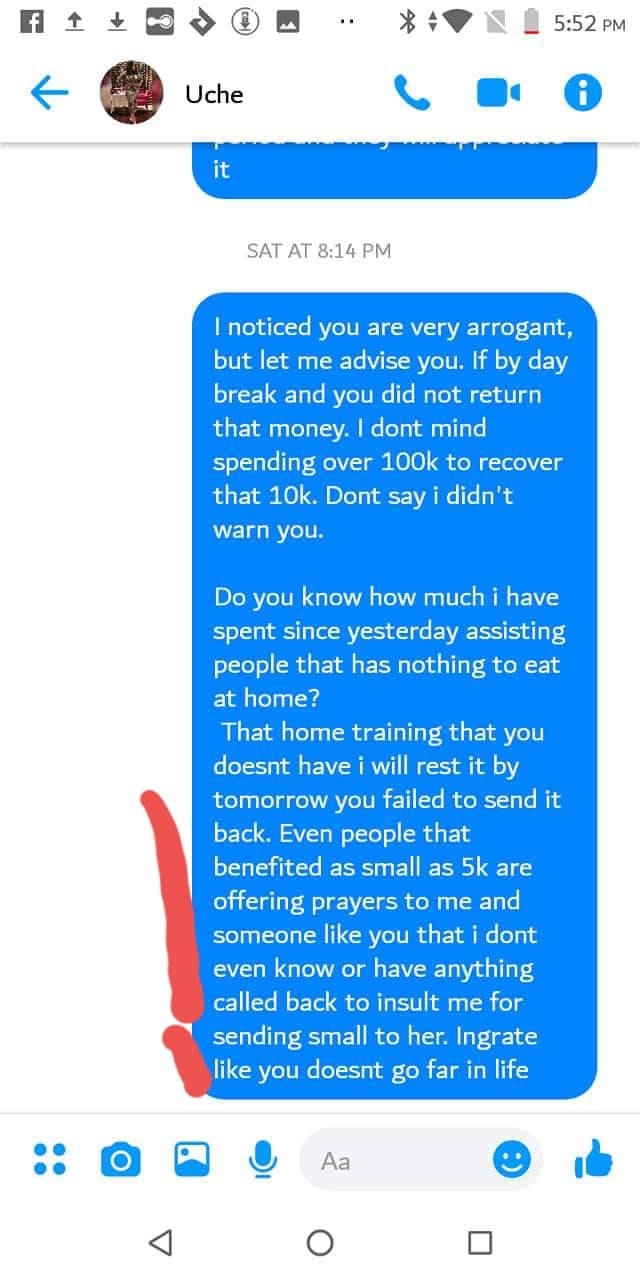 A reaction was expected from the accused lady and a reaction was got. Uche Nilla Amechi, who has now deactivated her account on the platform had found a medium to reveal her own side of the story.

According to her, she and Okorie were online acquaintances and she was only interested in him because she thought he had a connection with someone in the oil and gas business and she had been trying to get in touch with this person to discuss business, so she thought Okorie could be her plug.

She says, upon a few conversations, she got to realize that he didn’t have person’s connect but had just taken a photo with the person, but still she engaged him in conversations.

She went on to reveal that recently, Okorie buzzed her to ask how she’s fairing with the Covid lockdown in the country and in course of their conversation, offered to help her.

She said when he sent her 10k, she thought he was joking and so put a call through to him and it was after he hung up on her that she got exasperated and took to his DM to state her displeasure.

She says she never begged him for money as she’s not hungry but was only acknowledging his offering of help. She shared screenshots of the genesis of their conversation writing,

Firstly, I want to start by saying thank you to all those who have actually defended me even without knowing me and those also that know me and are still defending me! THANK YOU

Secondly, this man ID OKORIE had always texted me here on fb for a long Time; I used to ignore him, barely replied or sometimes replied with one word, until sometime last month(feb) when I realised he’s In the oil and gas sector and I am too, so i thought I could actually have him as a contact.. We never know!
I was going through his pictures sometime ago and discovered he took a picture with someone who was a top Boss in NNPC and I told him about some petroleum products trading I was into and we(I and my colleague) have been trying to reach the man he took a picture with, if he’s close to him so that he could take us to his office just for contract purposes.
After our conversation I realised he didnt know the man or have any personal relationship with him, he just took the photo with him at an event.
Fast forward to the issue on ground, he texted me on fb sometime last week asking me how I was coping with the lockdown and all, I said I’m fine, he now said If I needed anything( food stuffs or provision) I said if you are offering I dont mind. He then suggested that I call a supermarket to order and have it delivered, he would pay!

I told him I have never heard of supermarkets doing delivery and even if they do, now they are very busy because of the whole panic buying and might not be able to deliver he could send me the money and I would get it when I go out, he said okay… After a while I got an alert of 10k I called him immediately and jokingly said so its 10k you sent.

If they were going to deliver to me, for instance i ordered, do u think it’s going to be 10k? I was still talking and he hung up. I got angry and sent him a message, the one he allegedly screen shotted telling him not to ever end the call on me again, I didnt ask him for nothing, he offered! After which I deleted and blocked him on fb and messenger..
He sent me a message later that day to my WhatsApp to return the money to him, I saw it and ignored because, I saw it late at night… only for me to wake today to so many lies that he said he didnt know me, he was doing a giveaway and I begged him for money, I asked him to introduce me for whatever purposes etc.. 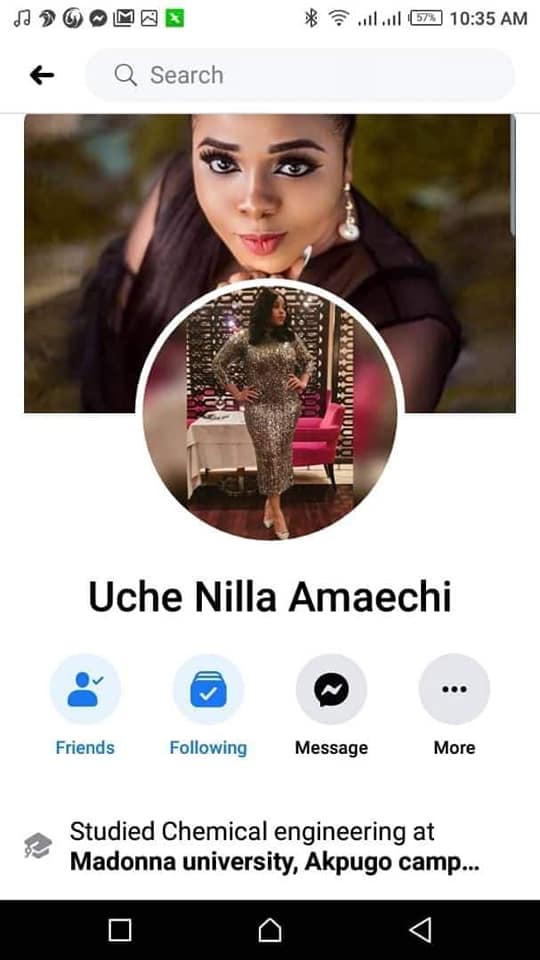 Now, why didnt he post the chats where I begged him to add me to his giveaway or from the beginning to support his claims? He only screen shotted the conversation that followed after he hung up on me just to try to tarnish my image or portray me as a bad person…

I suppose if u want to tell the whole world how I begged you for food or covid 19 allowance like I saw in some posts.. u would screen shot that exact message as the evidence or where I told you to introduce me to someone for runs or whatever purpose..
However, I took down my Facebook account because when someone drew my attention to his post this morning, I immediately went there to try to clear the air because I already deleted my chat with him and blocked him after he hung up on me so I didnt really have any proof other than our WhatsApp chat after he claimed he didnt know me before.
While I was trying to post it I noticed he was deleting my comments and eventually blocked me, suddenly the traffic to my page, friend requests, following people commenting under my pictures and my notifications was beeping rapidly; didnt know how to manage it so I deactivated my account…. I never begged this man for money or ask to participate in his giveaway neither did I ask to be introduced to anyone for the wrong reasons!
There are always two sides to a story before you judge, castigate or tarnish someone’s image pls always find out the truth or at least hear from the other person
Uche Nilla Amaechi
Thank you