Some suspected internet fraudsters, aka yahoo boys have allegedly injured an Economic and Financial Crimes Commission, EFCC operative in Abuja, while resisting arrests during a raid on their hideout in the city.
According to reports, the Commission nabbed Mmizoro Chinedu and Utyo Philip, two suspected internet fraudsters at the Nigerian Army Resettlement Estate, Jikwoyi, Abuja.

The suspects were arrested following intelligence report that alleged that they were perpetrating internet fraud.
Reports have it that the suspects put up a fight while resisting arrest which resulted in injury on one of the EFCC operatives.
One of the suspects, Mmizoro Chinedu who wanted to conceal evidence against him threw his phone into the toilet but it was retrieved and is currently undergoing digital forensics investigation in the Commission. 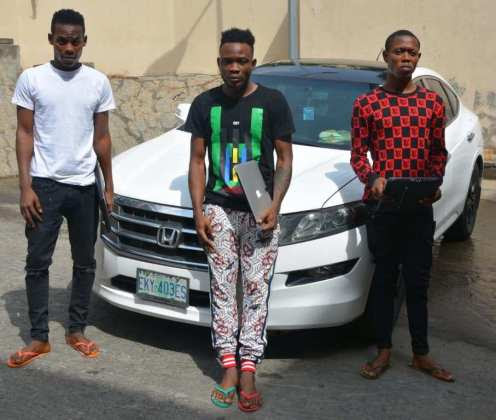