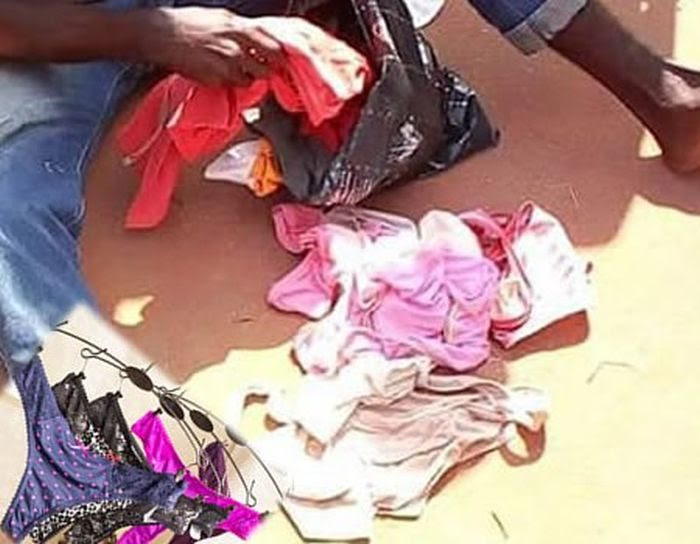 A female pant thief, identified as, Adejoh Ojonugwa, has revealed that he was sent to steal by a prophet, Olajide Ogunleye.
25-year-old panel beater,said the prophet of the Celestial Church of Christ, Ibanujemidopin Parish, Uso in Owo Council area, sent him to steal the pants as part of the rituals to make him rich.
While being paraded at the Ogun state police command, Adejoh said he recently approached Ogunleye for ways to get rich fast and that the clergyman asked him to get pants and ladies underwear.
Adejoh Said:-

“I was given a concoction by the prophet and, from that point, I could not remember what I was doing until I was arrested by police detectives. I regained my memory after four days when I remembered visiting the prophet for assistance to get rich. I had visited the prophet to pray for me because of my work and how to get rich.
After checking my palm, he told me there were ways out but asked me to swallow some concoction and prayed for me but asked me to look for ladies pants and underwear. But when I got home I didn’t know what I was doing again and I started looking for pants and underwear. I found three of my sister’s pants and I went to my brother’s house where I took two of my sister-in-law’s pants.
Hours later, my sister-in-law raised the alarm that her underwear were missing and I was arrested and taken to the police station. Two of the pants belong to my sister-in-law and the three others belong to my younger sister. When the police arrested me, I was taken to uso police station before they transferred me here (Akure)”.