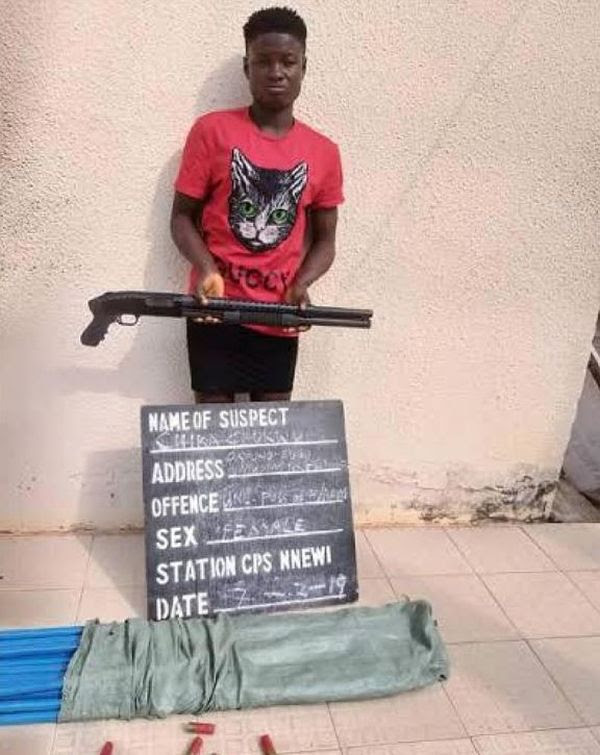 A 19-year-old girl identified as, Chika Chukwu, has been arrested by the police in Anambra state for unlawful possession of a pump-action gun.
City Round gathered that police detectives attached to the Central Police Station, Nnewi, in collaboration with the Okpunoegbu vigilance group arrested the girl on Thursday.
A member of the Okpunoegbu vigilance group, who spoke with our correspondent, said;

“The pump-action gun was loaded with four live cartridges and one expended cartridge.
“The 19-year-old woman was arrested at the Amahusa quarters on Thursday, where she concealed the gun inside a bunch of mopping stick in order to avoid being noticed.”

The Police Public Relations Officer in the state, Haruna Mohammed, confirmed the incident to our correspondent.
He said:-

“On February 7, 2019, at 6am, following intelligence report, police detectives attached to the Nnewi Division in conjunction with Okpuno vigilance group arrested one Chika Chukwu, female, aged 19, of Okpunoegbu Nnewi with a pump-action gun loaded with four live cartridges and one expended cartridge at Amahusa quarters Nnewi.
“The suspect concealed the gun inside a mopping stick. The case is under investigation in order to ascertain the motive behind her action after which she would be charged to court.”