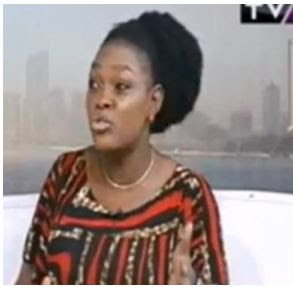 Twitter was on heat a few days ago after a Nigerian doctor via his twitter handle, told the story of a woman whose husband connived with his doctor to remove her womb because he did not want more kids.

According to the story which happened in Festac, the couple planned on three kids but ended up having 5 prompting the husband to do what he did.

Discussing the news on TVC’s show, The View, one of the presenters, Tope Mark-Odigie, stated that as long as they couple got married, the husband can do whatever he wanted with the woman.

”We cannot behave like the western world. We are in Nigeria and we are in Africa. We are a people that will tell a man to prostrate for hundred times to marry one woman. We are the one that will ask a man to bring a million Naira, to bring a goat, to buy everything possible because you are giving over that woman unto the man to take care of her, to make decisions for her, as long as you own her.

So, we are going to do legal wedding which means that I am bound only by the laws of this marriage. Then if my husband does anything contrary to my legal rights, of which we have shared everything in the marriage 50-50.

If you want to do culture, do culture. If you want to do modern 21st century family setting, then you focus on that. But you cannot eat your cake and have it. In our country, we have prioritized culture more than any other thing.

A man has a right to decide how a woman should look.If he wants her to be slim or be fat he would say add weight. He would tell her I have bought you. I own you. So I tell you how to look. I tell you how I want your body to look. I control your life.”