Menu
Home » entertainment » fact » MUST READ!! 17 Signs Of Highly Intelligent People (Do You Have Any Of The Signs?)

MUST READ!! 17 Signs Of Highly Intelligent People (Do You Have Any Of The Signs?) 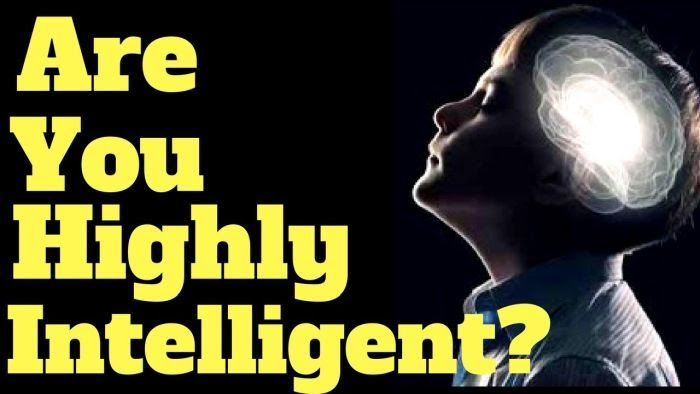 The world needs more intelligent people to become the kind of peaceful world everyone of us want for us and our children.

If we could have more people thinking more than they usually do out of sentiments and personal gain we would have a better civilized world.

For you to clearly identify intelligent people in the society, these are the signs you see with such ones below.

1. They have few friends

They might have lot of acquaintances, but they are careful to choose friends who are at their level of intelligence.

They prefer deep and thoughtful conversations instead of talking about the weather, about how rich someone is or the latest trends.

3. They are good listeners and they talk less

They know they have more to learn in listening than in speaking. So they shut their mouth and open wide their eyes and ears.

They google everything, ask any questions, search every subject. They can easily learn from anyone whether younger than them or not up to their standard, they don’t care.

They sit by themselves to practice their craft, to reflect about themselves, their values and their objectives rather than waste time with people who won’t add anything positives to their lives.

6. They invest on themselves

They know their mind is their most valuable tool. Thus, instead of chasing money, fame or whatever, they go on improving themselves.

7. They are long-term oriented

They don’t care about immediate pleasure for later gratification; they take hard decisions that would pay off in the long run.

They prefer to get the cake tomorrow than get a fish roll today.

They have goals and a mission of life and stick to it no matter what people think. They doon’t go around looking for who to like them, rather they appreciate themselves.

9. They are risk takers

They know a fulfilling life is beyond their comfort zone. So they are willing to take necessary steps to fulfill their dreams.

10. They are not judgmental

Don’t judge people for whatever reasons. They don’t know what is going on in their life, so they would rather keep shut than talk about people when the need to talk arises.

They know how skilled they are, they know they are learned, but they will be laymen in many other areas, so they are dead loyal knowing they are not the Boss in all areas.

They know millions of people are richer, so they don’t let their little change/money get into their head.

They know talent is not enough. So they work every day to be the better version of themselves. They take nothing for granted.

13. They take care of their health

They know their health is their most important asset. They eat properly, exercise regularly, sleep well and relax.

14. They are lifelong learners

They know learning is a lifelong process that does not stop at school or college.

15. They have a sense of humor

They don’t take life too seriously. They laugh at themselves and make people around laugh

16. They know people are important

17. They don’t things too personal

They also don’t take lists like this serious, they don’t really brag and care less about the glory.